Indomitable giants Turkey, world No.4 and defending champions, brushed off Peru in dramatic four sets 25-22 23-25 25-17 25-19 to remain undefeated in the Girls’ U18 World Championship at the Liptapanlop Hall on Monday. 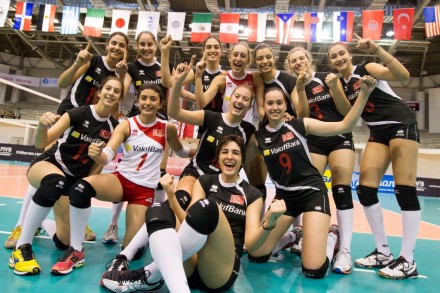 Turkey and Peru have yet lost a match in the top-flight tournament. The Monday’s clash served as decider which team would emerge as the Pool D winners. Turkey fielded a well-established roster in the likes of hard-attacking Pelin Aroguz, Ada Germen and Humay Topaloglu.

Turkey showed their incredible jumping ability to attack Peru for the hard-fought 25-22 win in the first set, thanks largely to powerful Pelin Aroguz’s lightning-fast spikes. Peru, cheered on lustily by their supporters with their nerves-wracking horns and music, came back to life in the second set when they struggled to surprise the reigning champions 25-23.

Pelin Aroguz topscored 21 points for Turkey including 18 points from spectacular attacks, while Leyva Angela led Peru with 18 points, 17 of them from deadly spikes.

With the sensational win, Turkey made it three in a row to win nine points, enough to top Pool D despite the fact that they still have to take on Mexico in their last match of the pool on Tuesday. Peru already finished their group round-robin preliminary clash and with seven points in hand from three wins against one loss, they are sure of finish second in the pool.