Eczacibasi will play for the trophy at the Women's Club World Championship 2015!!! 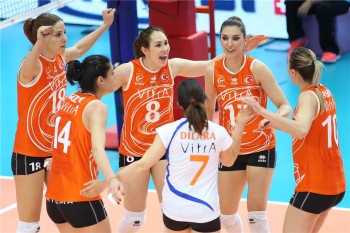 The reigning champions of Europe have defeated Volero Zurich after a thriller ending. Eczacibasi was up ahead by 2-1 in sets, when two sides played the most exciting set on the tournament.

The final score of the fourth set was 34:32 for Eczacibasi, and you can guess who was the heroine of the Turkish side. Of course – Jordan Larson! The American star performed a key block and scored the last point in this match.

Eczacibasi will play in the Sunday’s finals of the Club’s World Championship and the opponent will be the winner of the clash between Rexona Ades – Dinamo Krasnodar.

MEXICAN PEARL: He’s only 17, but plays like senior! (VIDEO)