World No. 1 the United States beat the host China in straight sets on Sunday in Ningbo to claim their third consecutive World Grand Prix title with an amazing immaculate record. Turkey, the sole European representative in the finals, ended up in third place to cap a memorable campaign whereby the players around head coach Marco Aurelio Motta had advanced to the final round for the first time in their history. 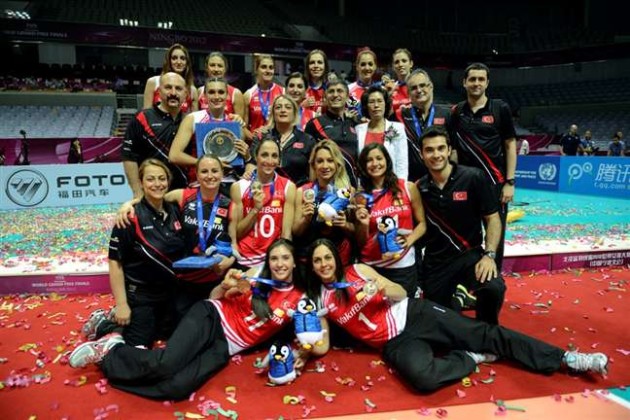 Having captured gold medals in the annual women’s Volleyball event in the last two years, the American women completed their hat-trick by winning all nine matches in a row in the preliminary rounds and five more in the final round in Ningbo. Megan Hodge, who scored 17 points for the United States in their 3-0 win over China, also received the awards of the Most Valuable Player and the Best Scorer.

Beijing Olympic champions Brazil tamed rising European powerhouse Turkey in four sets to finish runners-up to the United States for the third time in three years. The Turkish women, who will make their Olympic Games debut in London in some four weeks, could be satisfied with a bronze on a 3-2 win/loss record in their first journey to the World Grand Prix Finals. Additional glory to Turkey‘s Volleyball family was contributed by Neslihan Darnel and Gülden Kayalar who were awarded as best server and libero of the finals respectively.

Turkey coach Motta Marco Aurelio said:  “This is a historical day for Turkey. This is the first medal awarded to our team in the FIVB World Grand Prix. We have never won a medal in the real major international tournaments, so this is the first time. In the last two years we played many strong teams like Russia, Brazil, China, Italy, and we have become stronger and stronger. I am happy with our campaign here in Ningbo as we showed that we have the capability to play equal against some of the strongest teams in the world”.