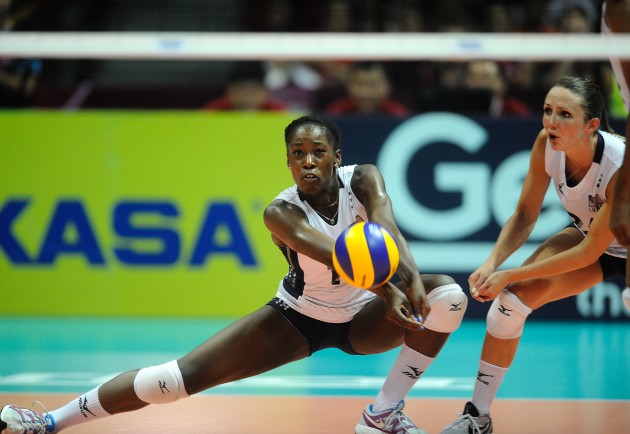 After the match, the United States finished the Grand Prix final with five consecutive wins while China, haveing a 1-4 win-loss record, ranked fifth at the six team tournament.

Hodge Megan contributed 15 spikes and two blocks for America to lead her team with 17 points, while Danielle Scott-Arruda added another 14, including seven blocks.

China had three players in double scoring digits, led by Hui Ruoqi 16, but had only three blocks during the 87 minutes game, comparing with 14 from USA.

The two teams both started strongly in the opening set, where USA maintained an narrow advantage to 8-6. USA launched a 6-2 run with solid blocks to China‘s quick attacks, pushing forward its advantage to 14-8. But China managed to catch up with USA 21-23 by spikes of opposite hitter Zeng Chunlei from the back row and kills from Hui Ruoqi and Fan Linlin from the left wing.

USA took the set point with a lethal spike by Kristin Richards, while China managed to save another three ones to a 24 draw. Bur the Americans finally took the set with two reception errors of the Chinese.

The United States overcame an early deficit 4-5 to grab a 4-1 run to lead into the first TTO of the second set strongly thanks to two sloppy China errors.

After the game resumed, China committed another four unforced errors to let America rally to 16-9 with a overwhelming 7-2 run.

Trailing at 20-10, China came back strongly with an amazing 11-3 run, but could not stop the USA marking their set point with a quick kill by Scott-Arruda. Zeng Chunlei‘s spike flied out of the court to give the US team the second set at 25-21.

China jumped to a 5-1 lead in the third set, while America managed to tie the game at 8-8, China again went ahead to come into the second TTO 16-12 on back of smart serves by Mi Yang, but the United States fought back with several kills from Scott-Arruda and 2.00-meter Tayyiba Haneef-Park to tie 18-18.

Tied at 25-25, Hodge rejected a quick attack from Xu Yunli to give USA the set point, and another spiking error from Zeng allowed the Americans win the final victory 27-25.