The Netherlands triumphs as the winner of the 2012 CEV Volleyball European League – Men! The Dutch earned the golden medals in a mind-blowing final in Ankara that ended with a thrilling tie-break to produce an incredible 3:2 (25-16, 25-15, 22-25, 23-25, 26-24) over home team Turkey. The team of Edwin Benne will now get a chance to earn a 2013 FIVB World League spot by representing the continent in the upcoming qualifications. 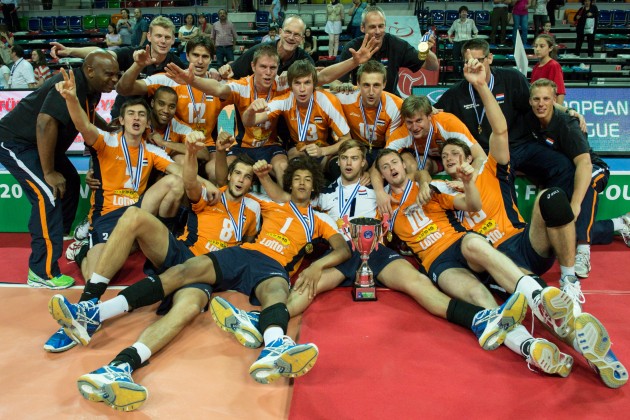 The Dutch completely dominated during the first two sets.  Fewer errors, better spiking and serving, but mostly unbeatable blocking by the Oranjes contributed to the solid 25-16 and 25-15 final results.

With the home crowd continuing to cheer their team on despite the negative development, Turkey resurrected in the third set. Serhat Coşkun was leading the Turkish offence as the score went back and forth through 21-21. Veljko Basic’s squad was more concentrated in the conclusive rallies of the set to win it by 25-22.

In the fourth set the Netherlands seemed to be reinforcing the tone of the first two as it quickly piled up a 5-point advantage at 7-2 that it was able to maintain through 14-9.  However, the spectators on the stands continued to pump the necessary adrenalin into the Turkish players’ veins and they gradually came back to tie the score at 22-22.  Three rallies later they were already in the lead to eventually win it by 25-23 and prompt a tie-break.

And what a tie-break it was! After a few changes in the lead and Turkey holding a 3-point advantage at 11-8, it was the Netherlands that got to the first match-point. But the end was nowhere near. Turkey survived nine chances for the opponent to win the match and missed two of its own. It was finally over at an incredible 26-24 and the Dutch were triumphant.

Emre Batur became the top scorer of the match with 21 points for Turkey as Serhat Coşkun added another 19. Humphrey Krolis scored 18 points for the Netherlands.

”The Dutch were better than we expected in the first two sets, but we played well in the next three sets”, Turkish captain Ulaş Kɪyak stated after the award ceremony was over. ”What is more important than whether we won or lost this match is that we will be better in the future.” Dutch counterpart Jeroen Rauwerdink added: ”We were impressed by Turkey’s performance yesterday and we knew that we had a tough game ahead of us. Although we played so well in the first two sets, then we slowed down, but still won the match. It is an important success for us to earn gold in a tournament like this.”

”This was like yesterday’s match for us”, head coach of Turkey Veljko Basic commented. ”I started seeing my real team from the third set one.  Whether you call it chance or human choice, we could not finish the tie-break as we wanted, but, nevertheless, this is the biggest success for Turkey in men’s volleyball.  We can say that the best team won this competition.” Dutch mentor Edwin Benne paid back the compliments: ”Both of us, coaches, should be proud of our teams after a match like this.  I never thought it would be easy, even after the first two sets.  We have not played a game like this for many years.  It is an amazing emotion to win such a battle.  I think that, step by step, our team is getting better and better.”