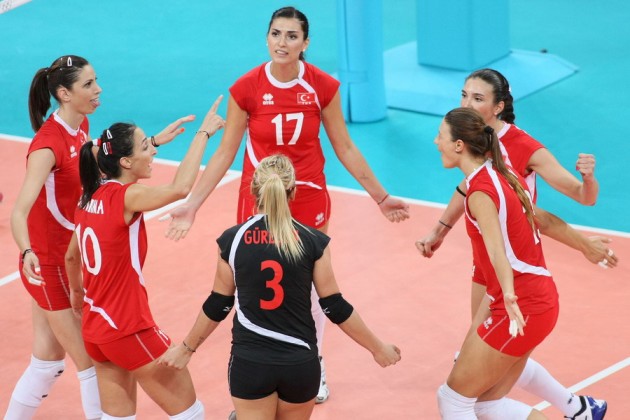 Korea has got similar figures and hence the fifth and last round of action coming up on Sunday will determine the final standings of the group as well as the composition of the 1/4 finals. Darnel scored 27 points for Turkey well supported by Gözde Sonsirma and captain Esra Gümüs with 13 and 12 respectively while Korea’s scoring machine Kim Yeon-Koung chartered “only” 21.

After upsetting Brazil only a couple of days ago, Korea got to play Turkey, a team celebrating their first Olympic appearance in London. It was a special match for Korean star Kim Yeon-Koung after she spent the last season in Istanbul playing there for the likes of Fenerbahce along with some of the players standing today on the other side of the net.

Even though they were cheered by quite many fans, the Korean players caught a very slow start, their play being sloppy, particularly in defence, so Turkey quickly cruised to a massive 16-5 whereby the final fate of the opening set was determined quite early. Korea looked like a distant copy of the side that had downed, and in straight sets, the 2008 Olympic champions on Wednesday evening and Turkey – although missing middle blocker Eda Erdem Dündar who had suffered an ankle injury in the first set of the game with Serbia – comfortably set the pace of the match to finish it off at 25-16 with a splendid attack killed by their star Neslihan Darnel.

Anchored by the spikes of Kim, Korea woke up in the second set and set the paced there almost all the way through even though Turkey were able to draw level at almost halfway (13-13). After the second technical time-out, Korea opened the gap (21-17) and even though Turkey attempted a late comeback, storming back to -3, Kim could close the operations and call for the provisional 1:1 (25-23).

Things changed once again in set 3 where Turkey imposed its rhythm right from the early phases (13-8) and with their attacking force well commanded and marshalled by setter Naz Aydemir, eventually cruised to a 25-18 that put the side coached by Marco Aurelio Motta in a good position to claim their second win of the tournament.

The score stayed initially very close in set 4 (8:7 for Turkey at the first mandatory stop) before Korean coach Kim Hyung-Sil asked for a time-out as his side was trailing 9-13. That was a good move as Korea found back composure and fought their way back to flip the charts around with a terrific 10-2 break (19-15). It looked like Korea were going to call for the tie-break and that scenario turned into reality as Kim took her side by the hand to go for the final 25-19.

The teams started out there by regularly completing their side-outs before Turkey went up by two (8-6) as the players changed sides of the court. Korea got back on track drawing level at 9 all. Korea coach Kim took a time-out as his side was again lagging behind by 2 points and eventually got the effect he wished with another tie following at 11. A service winner by their star Neslihan contributed three match balls for Turkey and she eventually finished it off with an attack from the back row to claim her side’s second win in London.

The next and final stop for these sides in the prelims will be on Sunday as Turkey play Pool leader USA and Korea take on China.