The reigning champions beat Ziraat Bankasi in four sets, even though they were trailing after the first set! 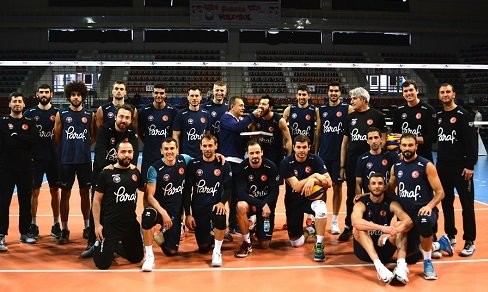 Felipe Fonteles and Dick Kooy were doing a good job for Halkbank, as the Brazilian player scored 20, while Dutch star added 19.

On the other side, Cristian Savani had 23 points, but he definitely needed help to stop the host team.

The duel between Tokat Belediye Plevne and Arkas was in the spotlight today. These two teams played one of the best volleyball games so far this season. Just take a look at their displays in the first set. After 84 points, home team managed to take the lead (43-41). But, afterwards, Sanchez Bozhulev (29 points) and his teammates played with a full throttle to down the home team 3-1.

Oliver Venno has also scored 29 in a jersey of Maliye Piyango, but his team has lost the game against Istanbul BBSK. Frenchman Antonin Rouzier played two sets and a half and he scored 18 points.

Afyon played their first game after Kevin Pinerua’s sudden death. They had to surrender after only three sets…

PHOTO(S) OF THE DAY: CHEERS! Ingenious design of Herrsching jersey