For many years, the French men’s volleyball championship Ligue A has been a true mecca for talented players and coaches to express their qualities in the best possible way. A 43-year-old Croatian expert Igor Juričić has emerged from this group this season as he led Tourcoing Volley-Ball to the gold medal in the French cup. 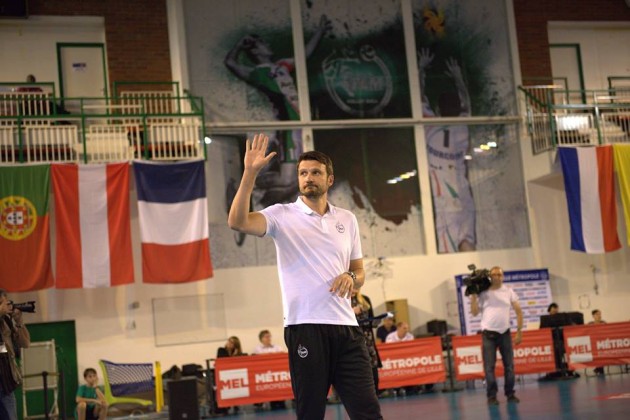 What are your impressions after winning the trophy in the national cup?

„Everything happened very quickly. The club officials have a project for 3-4 years by which, firstly, we had to progress to the top division. And we did. Next is to qualify for European competition by 2020, to come to the rank the club used to have. There was some pressure in the sense that a club lost the national cup final six times and national league final three times. They used to have great players but never won a trophy, and there were chances for this. On the road to the final, we beat Montpellier, Poitiers and ultimately, Chaumont. We knew we were not favorites, it was about 60%-40% for Chaumont. After all, they compete in the Champions League Playoffs 12. We all know how good is the coach they have and what kind of a play he’s nurturing. We had to play perfectly to win the trophy,“ former Croatia national team middle blocker (140 caps) said to our website.

How did the people in the club and around it react after the final match?

„There was a lot of joy, but there was also a surprise. We were acting like a totally different team, a totally different generation than all previous generations of players in the club. And fans recognized it and came back to the stands to watch us. There are generations of the fans who remember those lost finals, their sons… After we won the cup, there were tears. We were surprised with the positive reaction of the fans, of the city… It’s a nice feeling.“

Despite the fact Tourcoing occupy the spot in the standings that guarantees the playoffs participation, the things haven’t been so bright in the national championship recently as you suffered several defeats in a row. How to fix this?

„We secured a playoff spot. We are thinking of how to fix this. Now, we lost to Paris and we will have a tough game on the road against Tours. We had troubles with injuries, it really disturbed our plans.“

What are the ambitions of Tourcoing in the playoffs and do you feel some pressure from the club officials to make a good result?

„It depends on the fact against which team we will play. We still don’t know the name of our rivals. There are teams against whom we can play, and there are teams with whom you simply can’t play. There is no pressure, we achieved our goal. We will try to go as far as we can. There are teams who announced title ambitions earlier. Also, teams know each other well…“

The French championship is very attractive to watch in the sense that anyone can beat anyone. How difficult is to be the coach in such a league?

„It is great because young players can make progress in such a league. For example, we were successful in hiring prospect players. We practically came to the top division with the same roster we have a season before because we brought good young players. The French league offers a lot to young players with its high intensity of playing. It is clear which teams are favorites but there’s no easy game. For the coach, the expectations are big, sometimes beyond their limits, they can handle but it is very interesting for the spectators because it’s rear to see the match ending by a 3-0.“

Would you like to be at the helm of some national team in the future?

„Yes, I have ambitions regarding this. I even had some offers to lead some national teams but it is hard to think about it at the moment. I have a valid contract here and it is difficult to perform a dual role,“ Juričić concluded.

Is this the most controversial point in 2018 CEV Champions League…? (VIDEO)