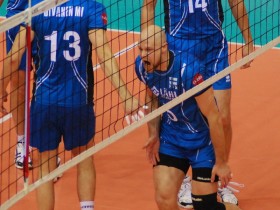 On Saturday Finland booked a ticket for the European Olympic Qualification tournament scheduled for May 2012 in Sofia after edging Slovenia 3:1 (15-25, 25-23, 25-22, 25-20) in the final match of the pre-qualifier that just came to a close in Osijek.

Slovenia surprised Finland by claiming the opening set but afterwards the guys coached by Daniel Castellani controlled the game and regularly stopped Mitja Gasparini who nevertheless top scored in the match with 19 points.

“Finland has got an experienced group and we were missing some important players” commented Slovenia head coach Veselin Vukovic. “We were also tired after playing four matches in four days”.

“We started poorly: our reception was not good and it affected our offense. However, everything just came together in the next sets” stated the Argentinean-born Castellani.

Finland was paced once again by Mikko Oivanen (14 points) supported by Antti Siltala and Olli Kunnari with 10 and 7 respectively. Tine Urnaut contributed 15 points to the Slovenian tally.

WL: Russia in the Finals