Poprad, Slovakia, November 26, 2011. Spain upset the hosts of Slovakia by claiming the final match of the Olympic pre-qualifier in Poprad after five long sets and a dramatic final rush (25-20, 21-25, 25-23, 21-25, 17-15) thereby taking revenge for the defeats previously suffered in the prelims of this tournament as well as this past July as the last act of the 2011 CEV Volleyball European League was played in Kosice. 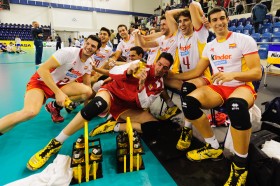 The home heroes looked nervous as the game got started while Spain played with confidence to set the tempo mainly via Iban Perez (13:7). After the Spaniards had enjoyed a margin of six by the second mandatory stop, Slovakia woke up and Lukas Divis scored for the provisional 20:22. Spain, however, accelerated again to claim the next three rallies and take home the opening set.

Branislav Skladany aced for the 7:4 in favor of Slovakia in set 2 and the addition of Martin Sopko to the starting six helped the home side wrap it up at 25-21. Spain defended extremely well in the third set (11:6), but Slovakia gradually woke up to finally tie at 22 all; however, the guests stayed cool and went for the 2:1 (25-23).

Slovakia streched the game to tie-break

Slovakia pulled back in set 4 and eventually stretched the game to the tie-break. Spain was up 8:6 as teams changed sides but Slovakia fought back for the 9:8; with Martin Nemec Slovakia stayed in the front (12:10, 13:11), but Jorge Fernandez turned things around with his terrific serving, so Spain had a first match ball as the score stood at 14:13. A block on Martin Nemec sealed the final 17-15 and fired up the Spanish fiesta, while the hosts and their fans looked somehow shocked.

“We are very happy with this win because it is very important for us to qualify to Sofia. Finally we have won a final match against Slovakia and in Slovakia. It was also important for our young players, because they have been working hard and this victory pays back their efforts. We were trailing down in the final moments of the deciding set but we always believed in our chances and this was important” said the head coach of team Spain Fernando Munoz.

“We made some mistakes in the tie-break. Our guys wanted to win so badly, they fought bravely, because the Olympic Games are a big motivation, but our experienced players shall not commit such stupid mistakes. Spain played good in the tie-break but we lost mainly because we did not have enough patience” singled out home mentor Stefan Chrtiansky.