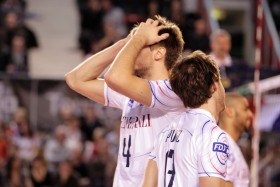 Belgium national volleyball team win upset many local fans in Tourcoing but was fully deserved. The Belgians took the opening set of that semifinal by out-blocking their opponents 8 to 0, before France fought back in set 2 mainly via Earvin Ngapeth, best scorer at the end of the day with 28 points. France was struggling in defense and although the local supporters were cheering loudly on their heroes, they missed on a set ball and Belgium eventually took home set 3 (26-24). France drew level in sets but Franck Depestele and his friends eventually deprived the hosts from the opportunity to run for a ticket to the European Continental qualifier scheduled for next May in Sofia, Bulgaria.

Gewehr: Our confidence is increasing

“Two months ago I was really disappointed with our result from the European Championship, we beat France there and almost took two sets from Italy but we finally did not make it out of the prelims. Our confidence is increasing day by day; we have a great setter and he is excellent also in driving our young players. Every game has got its own story and is decided by some small details” said Belgian head coach Claudio Gewehr. “I am very proud because we have been working with this group for 5-6 years and as they were juniors they were regularly beaten by France. It feels great to make it to the final and tomorrow we’ll go for the win”.

In the second semifinal Germany beat the Czech Republic after losing the opening set; the Germans served well and were anchored by their captain Björn Andrae.

“We are improving game after game” he stated, “we came here much focused and I think tomorrow the serving will be the key factor to take home the win”.