Barely recovered from the tough cup match against Postdam, girls of coach Teun Buijs wait team from Vilsbiburg in Schwerin Arena for hardest match in the season. 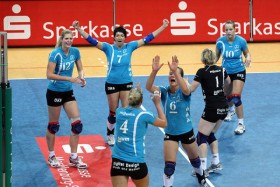 Rote Raben are playing with Schwerin SC on Saturday, next competetive match in Bundesliga Volleyball.

This match will be one of the toughest in seasaon.

Rabens have perfect record of 10-0 points. The SSc are reigning German champions, and they will try to collect more points in home games, so they can win championship crown, once again.

It will not be easy, becase the guest team is totally renewed.

Seven players from the last season are not in the team.

Both teams are viewing this game as a good preparation for the games in European competition, the SSC in the Champions League, the Red Ravens in the CEV Cup