The top game SSC-Vilsbiburg began for the Schweriner SC quite promising. The girls from Teun Buijs submitted 6-0. The guests had trouble with the harsh impacts of Denise Hanke. Vilsbiburg But it quickly turned to one, made ​​four points off each other well. 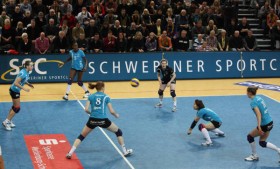 Buijs took a time out. On the first technical time out SSC still led 8-6. After a short time the Cuban Liana Mesa Luaces compensated for 11:11. The key highlights of Schwerin in this first part was Patricia Thormann. Their actions were rewarded with much applause from the audience. But the Rabens were in the lead again (20:21).

Schwerin could not stop them. The first set went to Vilsbiburg.

In the same formation (Thomsen, Topic, Retzlaff, Hanke, Thormann, Brandt) began the SSC. Raben coach Gallardo took a time out after 4:0. Julia Retzlaff was better now. Sure they brought their attacks to the finish. The set ended 25:15 for the SSC.

Third set finshed wiith result 25:20 for the Ravens and it was 2-1 in the game for them.

In defense Lisa Thomsen showed a good performance. It was followed by the 4th set that brought the decision. The SSC could not withstand the powerful continue to attack the guests. Vilsbiburg took the set home safely (25:16).