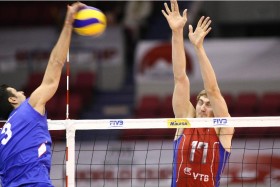 Serbia was resting many of their older players in the match, now that it can no longer finish in the top three. Leading Russia on the day was their captain Taras Khtey, who was awarded the match’s most impressive player award scoring 13 points. Maxim Mikhaylov and Dmitriy Muserskiy supported with 11 and 10 respectively, and seven blocks between them.

For Serbia, they were led by Uros Kovacevic with 11, followed by Aleksandar Atanasijevic with 10. Russia held a 15-4 blocking advantage in the match and delivered six aces to Serbia’s one.

Russia started the first set with Mikhaylov setting the tone early with a great block on Milos Vemic, and following shortly after with an ace to go ahead 7-4. His captain Khtey pitched in a pair of spikes from out wide, and a Muserskiy block put the Russians ahead five. Serbia’s Atanasijevic tried to rally the crowd behind his team, but Russia continued to serve well as Sergey Tetyukhin kept his team rolling with an ace that trickled over the tape to make it 20-13. And yet another from Alexander Volkov (Russia’s fourth in the set) helped seal it 25-16.

Russia had great blocks from Muserskiy and Mikhaylov putting the Russians up early in the second set. Serbia had a few bright moments, namely an impressive Mihajlo Mitic block on a driving Mikhaylov. But neither the big spiker nor the Russia team were fazed as Mikhaylov powered a spike through Serbia’s block on the next point to put them up 10-4. But it was Russia’s strong blocking that made the difference in this set, putting up seven in the set, including a great stuff by Nikolay Apalikov to go ahead 20-11. From there, the big man Muserskiy would drop two hard spikes late to close 25-16, two sets up.

It was more of the same in the third, with Muserskiy posting his third block on an attacking Uros Kovacevic to go up 7-4. Serbia’s Milos Vemic managed to break through on a trio of scores on the wing, and Uros Kovacevic had some luck attacking as well — but it was really too little too late as Sergey Makarov came off the bench with an ace to make it a 19-11 lead. A Denis Biriukov ace would end it emphatically for a Russian squad which served and blocked well on the day.