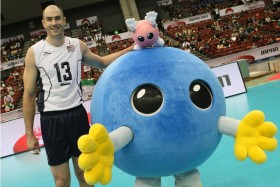 The victory improved the U.S. win/loss record to 3-3 in the tournament, while Iran slipped to 4-2 with the defeat. Clayton Stanley notched a match-high 25 points for the winners, including 5 aces and 7 blocks. Matthew Anderson added 14. Stanley was named the most impressive player of the match. Mehdi Bazargarde was the top scorer for Iran with 10 points.

An Iran side that enjoyed good success in the first two rounds of the tournament looked flat from the outset this day, lacking the energy that helped produce victories over Serbia, Japan, Argentina and Poland.

Anderson’s spike put the U.S. in front 8-4 at the first TTO. A Bazargarde spike pulled Iran within 9-5, but Mousavi then sailed a serve long. The U.S. looked firmly in control the set at 15-5, but Iran scored five straight points. Stanley’s spike saw the U.S. with a 16-10 advantage at the second TTO. The American then stormed on to take the match 25-14.

Finland and Slovenia cross their ways in...