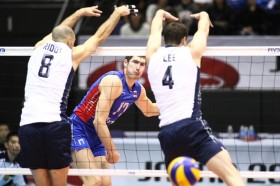 Maxim Mikhaylov’s goal is to win every match

Although the Russians had an easy time in beating the ailing Serbian side, the win avenged their European Championship loss to the latter and certainly a welcome addition to maintain good standing in the competition. For Mikhaylov, it was a good sign that their second team could play just as good as the first team.

After losing to Brazil in the second round, Russia’s main focus now is to win every match if they want to get one of the three Olympic qualification tickets.

Mikhaylov is aware that their next opponents, Argentina and Cuba, are strong opponents. But as far as his motivation goes, winning is the only thing in his mind.

By Mark Lebedew: Could They Play Now?