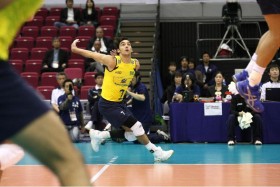 Leading Brazil in scoring was Leandro Vissotto Neves with 17 points, including a pair of Brazil’s five aces. He was supported by his captain Gilberto Godoy Filho (Giba) with 12 points. For Argentina it was Ivan Castellani and Mariano Giustiniano with seven points each.

The teams were even starting out in the first with a well-rested Vissotto (who rested the last game vs China) pitching in four points for his side early, while Federico Pereyra countered with attacks for Argentina putting his side up 8-7 at the first TTO. They stayed tight until Brazil pulled off a four-one run with spikes from Endres Murilo and Giba to edge ahead 18-15. They didn’t play great volleyball down the stretch with a number of errors late that led to 22-22, but Brazil still outlasted the Argentinians with hard strikes from Giba and Lucas Saatkamp to take the first 25-22.

Brazil held a slim lead to start the second, with Giba attacking well, driving Giustiniano staggering backwards with a hard spike to the chest help his side up 8-6. They would edge out a little further on great blocking by Vissotto (on Cristian Poglajen) and Lucas (on Giustiniano). Giba kept picking his spots from the wing, a hard spike to the corner making it 19-15. From there Vissotto would throw down two of his eight points in the set to help take the second frame 25-20, two sets to zero.

Murilo got in on the action in the third for Brazil, dropping three points early, followed by a hard Vissotto ace to go ahead 9-6. They followed with a five-one run that included a picture-perfect ace from Marlon Muraguti Yared and a block from Sidney dos Santos Jr (aka Sidão) make it 17-10. Argentina put together their own mini-run late coming from seven points back to cut the lead to 23-21, but a Sidão block denied their comeback, taking the set 25-21, and the match 3-0.

FOR HONOR AND GLORY: Let the fights...