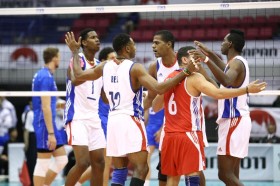 Cuba opened their third round with a big win over Italy

Cuba was led by their young dynamic duo of Wilfredo Leon Venero and Fernando Hernandez Ramos with 21 and 18 points respectively.

For the Italians, Michal Lasko posted an impressive 20 and Cristian Savani supported with 16. Italy served well, with nine aces to Cuba’s two, but they were outblocked 11-5 in the contest

Cuba jumped out to an early edge, but Savani brought his team even with an ace at 6-6. Cuba’s Leon and Italy’s Lasko were both attacking well, the former gradually leading his side to a 16-14 edge at the second TTO. Sandobal Isbel Mesa helped cancel out Lasko with a block that helped Cuba extend, and Leon — who scored seven in the set — brought a hard drive against Andrea Giovi that made it 22-18. Cuba would take the set on Mesa’s second block of the frame, 25-21.

Cuba’s hard-hitting lefty Hernandez fired home an ace early in the second, but Italy countered with a southpaw of their own in Lasko, who scored three as his side jumped out 10-5. And while Cuba rebounded, Lasko snatched back that lead with a laser spike that knocked over Bell, making it 15-10. That was all the advantage they’d need as Ivan Zaytsev, Savani, and Lasko all pitched in a pair down the stretch to take the set 25-19 drawing even at one set all, capped by a Lasko ace.

That seemed to fire up Mesa who brought three blocks on the Italians to give his side an 8-3 edge in the third. But Lasko replied immediately with consecutive stuffs on Hernandez, shortly followed by Luigi Mastrangelo’s second ace to cut the lead to two. They’d tie it up at 14-14, then Mesa’s fifth block of the match soon put Cuba ahead three. Combined with late errors from Italy, Cuba took five of the last six points to take the set, 25-20, two sets to one.

In the fourth set it was all Hernandez for Cuba scoring seven before the second TTO including a powerful drive to put his team up 15-10. And despite the best efforts of Zaytev and Lasko, who were attacking well late, Leon and Hernandez proved too tough. Yassel Perdomo Naranjo stepped in with a block on Lasko at the end, clinching it 25-17, 3 sets to 1.

Brazil in need of three wins at...