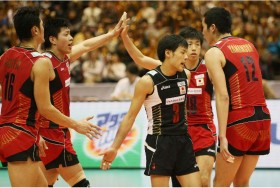 The victory gave the home team a much needed lift after a frustrating first two rounds.

Japan was winless at 0-5 coming into the match, while Egypt stood a 1-4.

Kunihiro Shimizu and Yusuke Ishijima were the key components in the win for Japan. Shimizu was named the most impressive player of the match.

Ahmed Abdelhay was sublime in defeat for Egypt. After losing a tough first set, Japan dug deep and found the will to prevail with excellent teamwork.