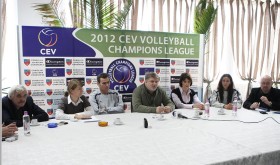 As they are about to embark on this adventure and to take on some of the strongest clubs out there, the Romanians want to deliver a good performance.

This is a pretty much different arena than the CEV Volleyball Cup they were used to participate in and hence any win along the way may be seen as a great result for the Romanian side. However, head coach Darko Zakoc says his team has got very high ambitions for this campaign. 2004 Tomis CONSTANTA was assigned by the drawing of lots to a group that includes the reigning champions of VakifBank TTelekom ISTANBUL, plus multiple winner Norda Foppapedretti BERGAMO of Italy and Azerrail BAKU, the club that last year claimed the title of the GM Capital Challenge Cup.

“Even though we have been assigned to the toughest group of the prelims, I do not think that the outcome of the matches will be determined by the budgets or the names of the clubs we are going to play” says head coach Darko Zakoc. “This is certainly not an easy Pool, but we are going to play with glowing hearts and with the support of our fans everything is possible. We hope to see many people in attendance for our home matches and to pay back with a great show” added captain Claudia Gavrilescu.

Serbia’s Jovana Vesovic joined the team only four days ago after arriving directly from Japan where she recently competed in the FIVB World Cup together with her national team.