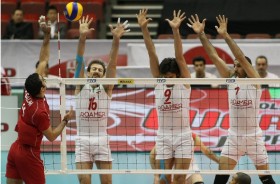 The win gives Iran a 5-2 record for the tournament, while Egypt falls to 1-5. Seyed Mehdi Bazargarde once again paced Iran with a team-high 14 points, while Hamzeh Zarini and Alireza Nadi added nine apiece.

Nadi was named the most impressive player of the match.

Reda Haikal was the best scorer for Egypt with 14 points. Iran controlled the match from start to finish and forced Egypt into many unforced errors. The Iranians exhibited superior offensive and defensive skills in the win.

A block by Mohammad Mousavi saw Iran take a 5-1 lead in the opening set. Bazargarde‘s spike made it 7-4 for Iran and they led 8-4 at the first TTO. An Egypt serve sailed long and Iran moved out to a 13-7 margin. A good rally ended with a Bazargarde block for 14-9 and Iran led 16-9 at the second TTO. Egypt called a timeout with Iran leading 19-10. A service ace by Ahmed Abdelhay made it 20-12 and Egypt followed that with a block. A Pourya Fayazi spike gave Iran set point at 24-17 and they closed out the set 25-18. Bazargarde had seven points in the set.

Iran led 7-5 in the second set when Haikal flew in for a spike. Nadi’s spike put Iran up 8-7 at the first TTO. Mousavi’s spike took the score to 13-10 for Iran. Bazargarde’s spike gave Iran a 15-10 margin. Alireza‘s spike made it 21-18 for Iran. Another spike by Haikal pulled Egypt within 23-20. Mousavi’s dink took Iran to set point at 24-20 and Fayazi’s block gave them the set.

With Iran up 4-0 in the third set, Egypt called a timeout. The Iranians led 8-4 at the first TTO. Zarini’s spike saw Iran go up 9-5. When Egypt moved within 10-8, Iran took a timeout. A reception mistake by Abdalla Ahmed made it 14-10 for Iran and Fayazi followed with a service ace. Mohamed Issa served into the net and Iran led 16-11 at the second TTO. Mousavi’s spike gave Iran a seven-point lead at 18-11 as they moved closer to victory. Haikal sent a spike long at Iran had match point at 24-15 and they clinched it on the next point.