This year’s European Volleyball Gala did feature much more than the Drawing of Lots for the 2014 CEV Volleyball Champions League as some of the major stars of the sport got together in Austria’s capital city on Friday night. 8 Volleyball and Beach Volleyball players were awarded at UNIQA Tower in an effort to showcase the athletes that are contributing to the growing popularity of the sport via their outstanding performances, unique personality and/or what they have achieved through the years. 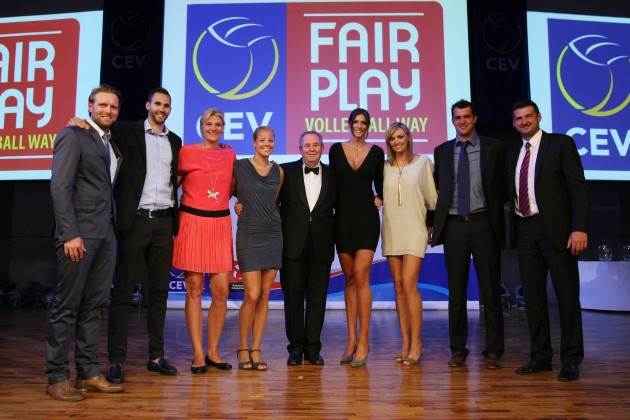 Lifetime Awards for Grbic and Glinka

Serbia’s Vladimir Grbic, 43, and Poland’s Malgorzata Glinka-Mogentale, 36, received a Lifetime Award in recognition of their outstanding careers. Grbic – who retired from the sport in the summer of 2009 – is an Olympic champion from the 2000 Games in Sydney, a four-time medallist from the European Championship (gold in 2001, silver in 1997, bronze in 1995 and 1999) and a silver medallist from the 1998 FIVB World Championship in Japan. The son of former Yugoslav star and coach Milos and the brother of setter Nikola – who at 39 years of age won silver this past March in the final four of the CEV Volleyball Champions League while representing the likes of Italy’s Bre Banca Lannutti CUNEO – Vladimir Grbic is currently a Vice-President of the Volleyball Federation of Serbia, a member of the FIVB Development Commission and is very much involved in promoting Volleyball and Beach Volleyball among the young generations of his native country. “This award makes me feel even more obliged to intensify my work with the children and pass on my experience and passion for the sport” Grbic said.

Malgorzata Glinka-Mogentale is a double European champion (in 2003 and 2005) and a two-time winner of the CEV Volleyball Champions League (in 2011 and 2013). Glinka first retired from competitive sport in 2008 after the Beijing Olympics to focus on her family but then signed for Vakifbank ISTANBUL in 2010 to prolong her Volleyball career and be awarded MVP of the CL final four held in Istanbul in 2011. Throughout her career Glinka has played in Poland, Italy, France, Spain and Turkey. She was voted MVP of the 2003 FIVB World Cup in Japan though her team had finished only eighth there. “I am probably going to play for one more year but I will be going back to Poland” she said. “Anyway, I am more than delighted with this prize that I see as a very special recognition for what I have achieved in my career”.

Juantorena “the most spectacular player” out there…

A three-time winner of the CEV Volleyball Champions League (2009-2011) with TRENTINO Diatec and a four-time club world champion (2009-2012), Cuban-born Osmany Juantorena – an Italian citizen since 2010 – is well-known for his unique technical skills, great athleticism and amazing jumping power; he spikes from a height of 370 cm thereby finding a way even through the highest blocks. Juantorena is the nephew of former track & field star and 1976 double Olympic champion Alberto Juantorena. “I feel very much honoured to receive this prize and I have to express my gratitude to my club for Volleyball is primarily a team sport. They do deserve half of this prize. I would like to wish the very best of luck to all teams that are set to participate in the next edition of the CEV Volleyball Champions League” he said.

The long-time team captain of Bre Banca Lannutti CUNEO, Wout Wijsmans played the final match of the 2013 CEV Volleyball Champions League this past March and missed out on the title for two points as his side ultimately lost to hosts Lokomotiv NOVOSIBIRSK. Though born in Belgium, Wijsmans received Italian citizenship in 2010 after spending the past decade in the country where he has settled down with his family. In 2010 Wijsmans won the CEV Volleyball Cup whose final four was held in Maaseik, the city where he had started his professional career in Volleyball. In contemporary Volleyball – where many players are moving almost every season – his loyalty to Bre Banca Lannutti CUNEO for a total of 10 years is something remarkable and as such he has turned into the undisputed leader of this team. “I am very grateful to the coaches and players who have accompanied me through the decade I spent in Cuneo” Wijsmans said. “I am about to leave Italy after 14 years and move to China. This is a very interesting challenge for me as an athlete and as a person as well. I am looking forward to it and hope I can share my long experience with the players I will meet there in China’s national league”.

The charismatic team captain of RC CANNES, Victoria Ravva – who will turn 38 later this year – is a double winner of the CEV Volleyball Champions League (in 2002 and 2003); she has won France’s national league 17 times since debuting there in 1995-1996. Born in Tbilisi, Georgia, she started her Volleyball career in the then Soviet Union before moving first to Turkey and then to France; she briefly stopped playing in 2006 after having twins but successfully resumed her Volleyball career only a few months later. In 2012 she anchored her team to a silver medal in the CEV Volleyball Champions League losing the final match to Turkey’s Fenerbahce Universal ISTANBUL. This past season and after the group was significantly rejuvenated, RC CANNES made it to the Playoffs 12 losing there to Rabita BAKU (AZE). “I feel very proud to be awarded tonight. Volleyball means everything to me, the love I feel for this sport can be compared only to the affection I feel for my children” she said. “Still this is not the end of my career because I am planning to play for another 2 years and maybe once I retire from the sport CEV will be awarding me once more” she joked.

“Newcomer of the year” award goes to Jovana Brakocevic

Right by the time she did debut in Europe’s elite competition, Jovana Brakocevic seized the title with Vakifbank ISTANBUL and was named MVP of the final four at 24 years of age. MVP of the 2011 CEV Volleyball European Championship co-hosted by Serbia and Italy and where Serbia won gold for the very first time in history, after starting her career in Serbia Brakocevic moved abroad and played first in Italy, then in China and Japan before returning to Europe and signing for Turkey’s Vakifbank ISTANBUL. MVP of the 2011 CEV Volleyball European League where Serbia claimed their third consecutive title in the event, she is the sole player to have swept the MVP award in each one of Europe’s most important Volleyball competitions.

Together with former partner Jonas Reckermann, Julius Brink has written history by turning into the very first European duo to win the World Championship title (in 2009) and Olympic gold this past summer in London. Brink is also a triple European champion (in 2006 together with Christoph Dieckmann, in 2011 and 2012 partnering Jonas Reckermann), and a bronze medallist from the 2005 and 2011 FIVB World Championship. After Reckermann retired from competitive sport following the Olympic season, Brink teamed up with Sebastian Fuchs and is currently competing on the FIVB World Tour and will try to notch the title for a fourth time this coming July 31-August 4 as Klagenfurt plays host to this year’s European Championship Final.

Voted the rookie of the year on the FIVB World Tour in 2010, Marketa Slukova represented the Czech Republic at the 2012 London Olympics. Together with partner Kristyna Kolocova, she has been extremely successful in age group competitions, winning gold at the 2005 U18 European Championship, silver at the 2007 U20 European Championship, and three medals at the U23 European Championship (gold in 2010, silver in 2008 and 2009). At 24 years of age, she is considered one of the most talented up-and-coming players on the international scene, drawing the attention of many fans for her good looks and personality.

To read more news from all around the world click on From the World.

How to work on your endurance for volleyball