The 16th election assembly of the Croatian Volleyball Federation was held on Monday, 15th of June, at the Westin Hotel in Zagreb. 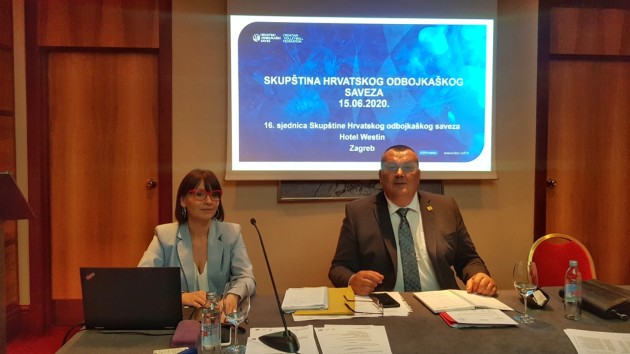 The planned Agenda included a brief report of the President, a report of the Supervisory Board, a financial report for 2019 and the election of a new president of HOS. The assembly unanimously elected the new-old president of the Croatian Volleyball Association, Ante Baković.

A new Board of directors of the Federation has also been appointed, which now has 13 members.

The marketing strategy through the vision and mission of the Croatian Volleyball Federation was presented to the present members of the Assembly. Vision: “Volleyball in every home for a better future.” Mission: “We are constantly working on the promotion and development of volleyball. We encourage excellence, inclusiveness and personal integrity. We share the knowledge and experience gained today, for better athletes and people tomorrow. ”

This assembly had one humanitarian initiative of President Baković, which was unanimously accepted, that the son of the former tragically died head coach of the women’s national team Miroslav Aksenitijević be paid 1.000,00 HRK per month for schooling. Finally, it was confirmed that the finals of the Croatian Cup and the Snježana Ušić Cup will be played on September 12 in Zadar, when the next HOS Assembly is scheduled.

Which volleyball leagues are still open for wagering?