GP: Japan’s captain: ”We wanted to win and we won.” 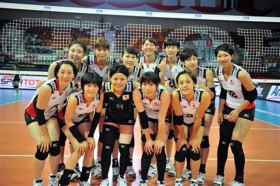 Japan posing in Ankara, after their win

“Our first match was with Thailand,” said Japan’s Captain Saori Kimura. “We have new players in our team. I wasn’t expecting this would be an easy game. But it was an easy game. We wanted to win and we won. I’m very happy to win the first match 3-0.”

“This was a good win,” said Japan’s head coach Masayoshi Manabe. “We played good. Thailand is a strong team. But we were better today.”

“This was our first game in Grand Prix” said Thailand’s Captain Wilavan Apinyapong. “We tried to do our best but it wasn’t enough. We’ll try to be better at the next game.”

“I want to congratulate Japan first,” said Thailand’s Head Coach Kiattipong Radchatagriengkai. “They played good. They have a very good structure of volleyball. My players tried very hard. We’re not satisfied today. We’ll try to do more in the next game.”

INTERVIEW: Sammelvuo for WoV – “Decision to...

PHOTO OF THE DAY: How to adjust...