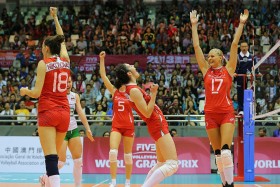 Joy of Bulgaria after winning the second set

In the first set, Netherlands and Bulgaria went head-to-head early on but the former managed to take a 2-point advantage in the first technical timeout from the crafty attack play of their setter. After the break, the Dutch team sustained a 4-point lead as Bulgaria struggled from their opponents’ forceful serves and attacks.

Bulgaria somehow managed to narrow the lead forcing the Dutch coach to call a timeout. The timeout brought about some relief for the Dutch team as they regained composure and took the first set with a 25-20 win from two block kills.

Bulgaria came back ang regained control of the second set – taking advantage of the unforced errors of The Netherlands. The Dutch team lost its momentum and succumbed to the pressing offense of their opponent 25-15.

The long rallies in the fourth set triggered loud cheers from the crowd as both teams displayed excellent defence. Bulgaria eventually reached the end mark from the neck and neck race in the fourth set at 25-23, which also marked Bulgaria’s first-ever match win in the World Grand Prix.