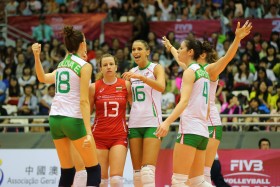 Bulgaria jumped ahead to an early 4-0 lead in the first set, forcing an early timeout from Cuba. Bulgaria managed to maintain their good start and took a comfortable lead with a display of aggressive spikes and tough blocks. Cuba offered little resistance in the first set and Bulgaria sailed through the set 25-8 in just 15 minutes.

The European side came out more determined in the second set and managed to take the leads in both technical timeouts. Despite being down by 10 points after the second technical timeout, Cuban did not give up and narrowed the score from excellent serves and spikes. Bulgaria responded with their rally to close out the set 25-15.

In the third set, Cuba looked unaffected of their two sets loss and displayed better team spirit that resulted to a better performance. But Bulgaria’s powerful outside hits could not lift Cuba to force a fourth set. Instead, Bulgaria’s steady offense favoured them to pull away and secure victory 25-16.