Serbian coach Zoran Terzic was not happy with the performance of his side against Czech Republic but glad enough to accept the second victory in as many days. 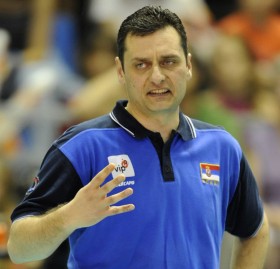 Zoran Terzic, coach of Serbia: “We played too relaxed, I didn’t like the match and the only satisfaction was the final result. We need to go back to the way we played on Friday against Dominican Republic because today we were not at our level. Even though we know we are better and stronger than Puerto Rico we have to play hard to secure first place.”

Carlo Parisi, coach of Czech Republic: “We are happy because our players gave their best effort and fought hard against a superior team we were seeing for the first time at an international competition. We made many errors that we try to avoid in our daily training but it was a good test for our players and a good experience. We feel we could have won the first set.”

Maja Ognjenovic, captain of Serbia: “We made many mistakes in the first set and they almost won it. The Czechs played very aggressive and went out looking for the victory. They were leading the first set and it was a big scare.”

Aneta Havlickova, captain of Czech Republic: “They played better than us and deserved to win even though we had a chance to win the first set but couldn’t stop the Serbian attacks. We had a good start but in the second we fell down and forgot the strategy and what we watched in the video room.”

EXCLUSIVE FOR WoV: Anastasi – “Thrilled for...