Poland ended their FIVB Girls' Youth World Championship campaign in the optimum performance as they thrashed Dominican Republic 3-1 (25-11, 19, 25, 25-16, 25-14) in the 7th and 8th positions match at Chatchai Hall in Nakhon Ratchasima on Sunday. 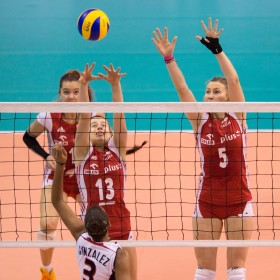 Poland improved all their errors in the last matches and played a wonderful game to gain the 7th position, three places back to their fourth position in Turkey 2011. Dominican Republic finished in the 8th position making their best performance like in 2001 and 2007.

Poland’s attackers Malwina Smarzek and Malgorzata Smieszek were the key factor behind the victory with their steady performance throughout the match. The first was the match scorer with 17 points all from killing hits and the second had a tally of 16 points including 2 blocks and three ace services.

Dominican’s opposite Galia Gonzalez led her team scorers by 14 points, while out of from Elizabeth Martinez who is one of the competition scorers gave a much less outcome, scoring only 8 points.