Brazil gained their ninth medal in their 13 participation at Girls' U18 World Championship with a victory in the bronze medal match in straight sets (25-29, 25-12, 25-23, 25-12) against Peru in the third place match Thailand on Sunday. 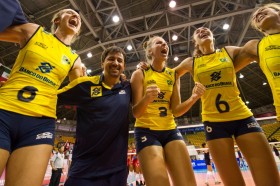 Peru got their best result in 8 participations equivalent to their same position 20 years ago.

Brazil’s center Gabriela Silva was the match star with her competition best blocking performance of 9 killing blocks beside her spiking from the center of the net to come as match scorer with 13 points. Simply Gaby was the secret to stop the efficient Peruvian opposite attacker Angela Leyva who scored her less record of only 12 points during the match although she kept as her team top scorer in that match.

Brazil did a good scouting for their opponent and succeeded to make a solid barrier against them through the tight blocking at the wings of the net as well as the tight backline defence led by the libero Lais Vasques who did well in defence.

Peru tried to enter the match only in the second set when they started to use the combinations the deceive Brazil block and succeeded to come near all through but Brazil worked well with the outside hitters to win the set.

Peru players were exhausted after they played 5 sets the night before against China in the semifinal, thus they couldn’t upset Brazil power to lose the match in straight sets.