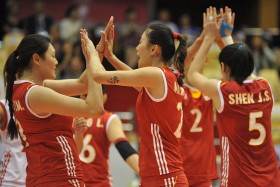 China’s Zhu Ting led all scorers with 32 points while Anne Buijs led the Dutch scorers with 17 points.
The first set was an even battle as both sides traded points early on. China and the Netherlands impressively started, not allowing each other get some breathing space until late in the set. Zhu and Wang Yimei’s hammering spikes lifted China to come from behind the Dutch lead and eventually moved past the thrilling deuce point 26-24.

In the second set, another thrilling encounter emerged as both sides fought for lead changes. Netherlands reached the second technical timeout with a very slim one-point margin. Netherlands eventually managed to pull away and ended the set from a sharp spike by Judith Pietersen 25-19.

China regained control of the third set on Zhu’s consistent attacking performance and Wang’s powerful serves that helped China to establish a 21-10 lead. Netherlands tried to get back in the match but China reached the final point in due course at 25-17.

China came out storming in the fourth set, sending a barrage of attacks on the Dutch side that allowed them to take an easy lead. China looked determined to end the match with a 20-11 lead but Dutch player Celeste Plak, who came off the bench, scored 6 points to cut that gap.

Coach Lang Ping allowed her new players to come in but the Dutch team could not turn the momentum to their favor as China ended the fourth set 25-17.

INTERVIEW: Milagros Collar for WoV – “After...