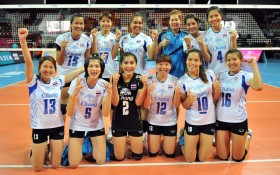 Thailand started strongly and jumped to a 5-1 lead, which forced Algeria to take an early time-out. Algeria struggled to score. They were 8-1 behind at the first technical timeout and 16-2 back at the second. Thailand maintained their dominance and won the first set 25-7.

The second set started with both sides trading runs but Thailand were 8-6 ahead at the first TTO and extended their lead to 17-8. Thailand won the second set 25-14 by making good blocks and with the spikes of Kongyot Ajcharaporn and Kanthong Malika.

Thailand carried their momentum from winning the previous sets into the third set and surged to an 11-3 lead. Thailand were still eight points ahead at the second TTO, and won the set 25-13.

For more news about this competition, read World Grand Prix 2013.

4 Ways to Stretch Your Hip Flexor