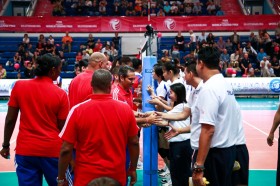 The first set started with Thailand gaining an 8-7 at the first technical timeout. Thailand’s Onuma Sittirak was excellent, keeping her side’s rhythm, but Rosanna Giel Ramos helped Cuba level at 19-19 before Thailand’s snuck ahead.

In the second set Thailand continued to spike successfully. Wilavan Apinyapong, Sittirak and the rest of the side snuffed out Cuba’s attacks to win the set 25-17.

The third set was much better for Cuba. They were five points ahead (8-3) before the first technical timeout. Sittirak’s outstanding spikes and service kept Thailand in it, but Yoana Palacio Mendoza and Melissa Teresa Vargas Abreu helped Cuba clinch their first set, 21-25.

But the momentum swung back to Thailand in set four, and they were dominant, dominating at the net to stay ahead for the whole set, and winning it 25-19, along with the match.

Cuba’s Palacio Mendoza Yoana led her team with 15 total points, while Thailand’s Sittirak Onuma had the most points among her teammates, with 16.