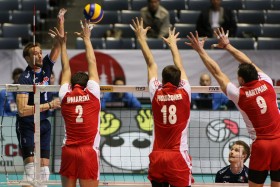 Poland gradually found a way to stop Italy’s best scorer Michal Lasko and turn the match around after trailing 0:2 in sets

The victory improved Poland’s record in the tournament to an impressive 8-1. Italy dropped to 6-3 with the loss. Piotr Nowakowski sparked Poland with 15 points. Zbigniew Bartman and Michal Ruciak added 14 each. Ruciak was named the most impressive player of the entertaining match.

Cristian Savani led Italy with a match-high 20 points. Michal Lasko contributed 19. The lone blemish for Poland came against Iran in the second round in Osaka. Italy’s only two losses entering the match were to Russia and Cuba. The Italians appeared to be in complete control after the first two sets, only to the match completely turn on them.