Iran has gradually turned into the major sensation of this year’s FIVB World Cup and although the players mentored by Julio Velasco won’t be able to book their trip to the 2012 Olympics in London directly via this competition, still they have greatly impressed the international volleyball community with their steady improvement and the excellent quality of their play. 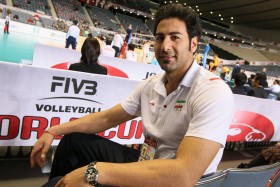 Ahmad Masajedi may be seen as one of the pioneers for the sport in Iran and he is somehow a unique personality as he played abroad for a few years, spending a total of 3 seasons in Denmark, claiming the national league as well as the MVP title by representing there the club of Skovbakken based in the city of Arhus.

“I also spent one season in Belgium, in Louvain, and had many try-outs also in other countries, including Italy. Once I was very close to sign a contract with Loreto: initially I was supposed to stay only for a few days, but I ended up by spending there a couple of weeks. Unfortunately we could not finalize our negotiations as I was having problems to get a visa and a work permit, but their intention was to keep me” recalls Masajed

“Volleyball is currently the second most popular sport in Iran after soccer. Of course its popularity is being fostered by our good results here and boomed after we claimed the Asian Championship this past September in Tehran, playing there the final match in front of 13’000 fans. Wrestling is still one of the most traditional sports in Iran and we get most of our Olympic medals from that discipline, but I can proudly state that volleyball is getting more and more attention also from the media. Our national league is extremely competitive and our clubs have signed some foreign players, including guys from Italy and other traditional volleyball powerhouses. This trend will certainly not stop in the years to come, and I have already started negotiating with players from the US and Japanese national teams who shall join our national league in the near future”.

Beppe Cormio: There is a mutual desire to renew the contract with Matey