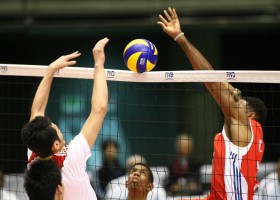 Cuba outscored China 109-107, in a win where every point mattered

Leading the way for Cuba in this high-scoring affair was Fernando Hernandez Ramos with 27 points. Right behind him was his captain Wilfredo Leon Venero with 19 points. For the losing Chinese side, it was Yuan Zhi leading with 26 points, and Zhong Weijun with 24 points.

Cuba started the match tentatively with three service errors early allowing the Chinese squad to jump ahead 9-5 on a nice tip up front from Yuan. After China made it 12-9, Cuba pulled off a run that saw them take eight of the next nine points, including three great attacks from Leon (of eight in the set) as his side went up 16-13. Zhong chipped in four points late (of his seven in the set) to keep China close, but strong play by Hernandez on the wing helped Cuba take the set 25-21 as Zhan Guojun sailed a serve long to hand it to them.

But Zhong brought the momentum into the second set, spurring his team into a 7-2 run to start with an early ace. But his serving went off target shortly after with two errors letting Cuba come back within two. But China’s Yuan suddenly got hot, delivering on five spikes mid-set to put his team up 17-12. Cuba looked to Hernandez again and again out right to help bring them back, but the gap was too wide and China would steal the set 25-18 on a clever overhead dump by Li Runming evening the match at a set a piece.

In the third set, Zhang helped China edge out 13-11 with a trio of hard attacks. China remained a few points ahead until a gorgeous ace by Henry Bell Cisnero equalized at 21-21. Cuba had many chances to close late, but China fought off three set points, and errant spikes from Hernandez and Bell gave them one of their own. A horribly mis-timed spike attempt saw a Cuba ball fall flat to the floor to give China the set 28-26, going up two sets to one.

Strong play by Cuba’s ‘little big man’ Bell helped the team to a 9-6 lead in the fourth. Yassel Perdomo Naranjo pitched in, helping extend to 18-14 on a hard spike. China came back within two on Zhong’s second ace, but there was too much Hernandez (six points in the set) and Leon down the stretch as Cuba took the set 25-20, drawing even at two sets a piece

Cuba let China jump ahead in the tiebreaker with errant spikes by Mesa and Bell to let them go up 7-5, helped by strong attacking from Zhang Chen who had been scoring well all day. But two errors from Zhong and Yuan near the end, handed Cuba all the advantage they would need as Hernandez would close on an emphatic spike at 15-13.