As the teams opened the final round of the tournament looking to secure one of the three spots to next summer’s London Olympics, Brazil improved their record to 6-3 with the win. The loss dropped Iran to 5-4. Gilberto Godoy paced Brazil with 15 points, while Sidnei dos Santos added 14. Godoy was named the most impressive player of the match. Arash Kamalvand and Hamzeh Zarini had eight points each for Iran. 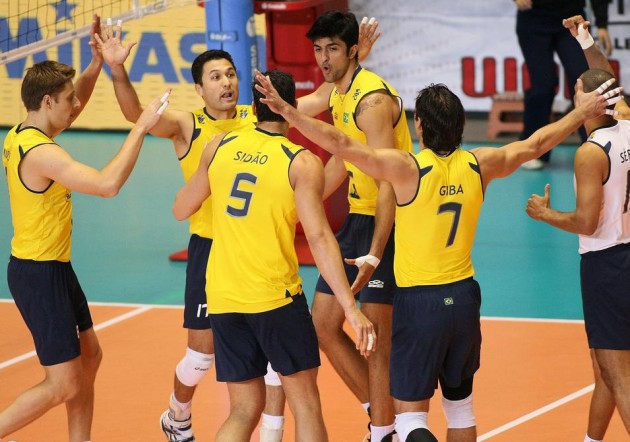 By winning 3:0 over Iran the triple world champions of Brazil are still in contention for a ticket to London 2012

A dos Santos spike helped stake Brazil to a 5-2 lead in the opening set. Leandro Vissotto‘s service ace made it 7-4 and Brazil led 8-4 at the first TTO. Brazil moved ahead 10-5 on an infraction by Iran. Kamalvand‘s spike made it 11-7. Kamalvand’s service error put Brazil up 13-8. Lucas Saatkamp connected on a quick spike to put the South American on top 15-9. Bazargarde‘s service error gave Brazil an 16-11 lead at the second TTO. With Brazil in front 19-14, Iran called a timeout. A nice option play spike by Gilberto Godoy made it 20-15 for Brazil. Another Godoy spike made it 22-16 and Iran took a timeout. Zarini’s block made it 22-17. A service error by dos Santos pulled Iran within 23-19. Godoy’s swipe gave Brazil set point at 24-20 and they closed it out 25-20 on a reception error. Giba had eight points in the set.

A Bazargarde block put Iran in front 3-1 in the second set. Nadi made a nice dink for 4-2. A reception error by Brazil gave Iran a 6-3 edge. Dos Santos served long make it 7-5 and Zarin‘s spike sent Iran into the first TTO up 8-6. Brazil scored three quick points to equalize 9-9, but a Saatkamp service error put Iran back up 10-9. The Brazilians moved in front 12-11 on a dink by Murilo Endres.  A block by Vissotto made it 14-11 as Brazil gained momentum and led 16-11 at the second TTO. Godoy’s block put Brazil up 18-12. Iran called a timeout while behind 19-13. Brazil was up 20-15 after Bruno Rezende served into the net. Saatkamp‘s spike took the count to 23-16 as Brazil looked to take the set. A spike by dos Santos made it set point at 24-18 and Brazil clinched it 25-18 on a spike. Godoy had six points in the set.

Zarini made a nice dink for 2-2 in the third set. An Endres block gave Brazil an 8-4 advantage at the first TTO. A spike by Endres put the count at 10-6. Vissotto‘s soft spike saw Brazil go up 13-6. Nadi’s spike made it 14-7, but Iran was cleary trying to hang on. Vissotto’s spike put Brazil up 15-8 and dos Santon took it to 16-9 at the second TTO. Brazil went up 21-12 on a reception error as they moved to close out the match. After another point for Brazil, Iran battled back with four straight points to make it 22-16. Brazil finished it 25-16 on a block by Saatkamp.

No look spike by the Lycurgus’ player...