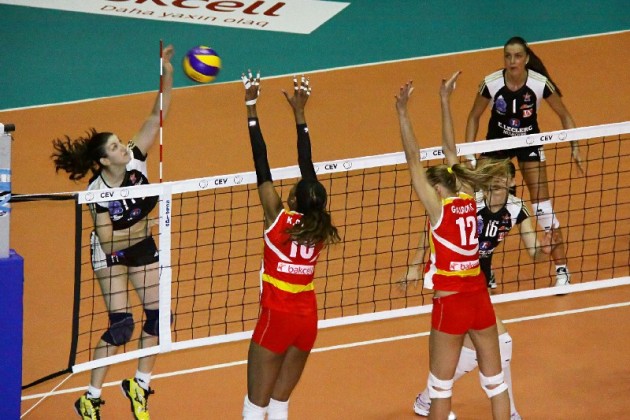 As they were missing their superstar Natalya Mammadova – still nursing a serious shoulder injury – the home side started with the strong spikes of Natasa Osmokrovic and Sanja Starovic while the guests answered back with Anna Rybaczewski. However, by the mid of the set, Rabita was able to stop the French spikers pretty often and that paved the way for the final 25-15.

Natasa Osmokrovic and Mira Golubovic were outstanding for Rabita in set 2 well commanded by Ukrainian setter Iryna Zhukova. Rabita displayed many combinations in attack and a solid defense to make it a quick 25-13.

Once again Osmokrovic and Starovic played at their best in set 3 and they completed their duty in straight sets to celebrate a splendid opening of their CL season.

“Our service reception was very bad today and this is one of the reasons for our loss” says French captain Armelle Faesch.

“Before traveling to Baku we knew that our rivals are very strong, actually one of the best teams in the world. However, we still wanted to win the game but our problems in reception did not let us any chance to attain this goal” adds head coach Magali Magail.

“All teams participating in the Champions League are strong and there are at least 6 or 7 contenders for the crown. This shows that it is going to be very tough for us and you never know what is next. We respect all teams and think only about our next matches” says local head coach Zoran Gajic.

“All teams are strong and ambitious, so potential rivals for us. We just have to stay concentrated and give our best to avoid surprises. Of course we want to take the title but it is a long way” concludes Rabita captain Mira Golubovic.