Pesaro, Italy, December 1, 2011. Italy’s Scavolini PESARO delivered a strong performance on Thursday night to defeat their opponents of Dinamo MOSCOW in straight sets (25-21, 25-17, 25-19) for the first round of action in Pool E of the 2012 CEV Volleyball Champions League. 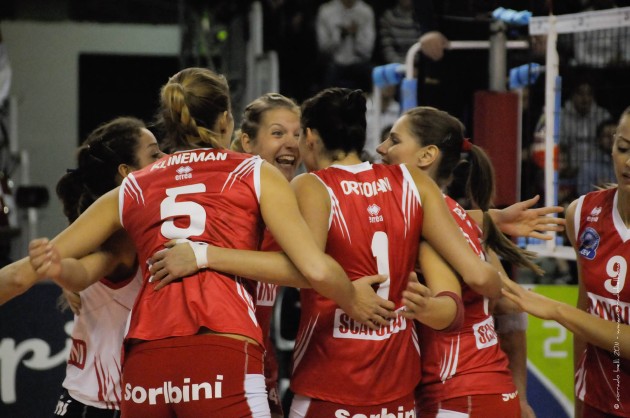 Scavolini got immediately into the match and with strong serving claimed the opening set with the score of 25-21. The home heroines registered 4 aces including a couple of winning serves scored by Serena Ortolani in the final section of the set. This trend continued also in set 2 where Scavolini aced three times and caused many problems to the Russian reception. Dinamo coach tried to stop this by changing his setter with Anna Matienko replacing Vera Ulyakina, but it did not help much and Scavolini cruised past at 25-17. Set 3 was pretty balanced but still Scavolini dominated the scene to finish it off in straight sets (25-19).

Serena Ortolani was named MVP after contributing 20 points – with 53% of efficiency in attack – including 3 aces. Scavolini registered 11 winning serves tonight with 3 apiece for Brinker, Ortolani and Klineman.

“We had an extraordinary approach to the match and the girls deserved to claim this victory. They really wanted to show what they are capable of and it is very important to get this win, especially for our confidence” says local head coach Luciano Pedullà.

“We definitely underestimated the strength of our opponent” adds Dinamo coach Boris Kolchin.

“They have completely changed their way of playing after signing a new coach while we did not get into the game from the start until the end. We could not stop their march even though I tried out many changes. The players I have from the Russian national team played below their level, we just handed over the first set like a gift and we could not fight back” he concludes.

Argentina: The balance of the return of...