Russia continued their Men's U23 World Championship campaign with another victory, beating Venezuela 3-0 (21-16, 21-15, 22-20) on day two of competition at the Arena Presidente Tancredo Neves. 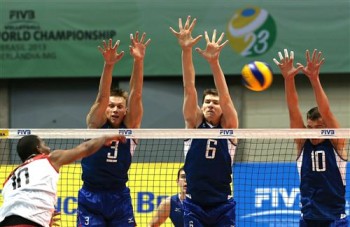 Venezuela began the first set strongly, moving into a 4-1 lead, but Russia turned the set around with some powerful attacking and blocking, wing spiker Oleg Krykun prominent with four points as Russia took the set 21-16.
The second set followed a similar pattern with Venezuela strong in the opening exchanges, before a run of Ivan Demakov serving turned the set for Russia. Ahead 12-10 at the technical timeout, Russia took the set 21-15.
The third set was more even, and Venezuela even held Russia at 20-20, but the pool B favourites again displayed their all-round attacking and defending options and completed another 3-0 victory, taking the third set 22-20.
As he was in the 3-1 defeat to Serbia on day one, Venezuela captain Kervin Martin Pinerua Urbina was his team’s main source of points, ending the match with 12.
Russia are first on court on day two of competition, up against unbeaten Iran, while Venezuela play Australia.