Thirty-six year old Marek Rojko was recently appointed head coach of Slovakia women’s national team. A two-year contract was signed on Monday with the Slovak Volleyball Federation with the goal to make sure that the team makes the final round of the 2015 European Championship after missing out on the last two editions (2011 and 2013). Rojko is the former head coach of Doprastav BRATISLAVA, a two-time winner of the Slovak national league, and since this summer he is also mentoring Alemannia AACHEN, a club competing in Germany’s first division. 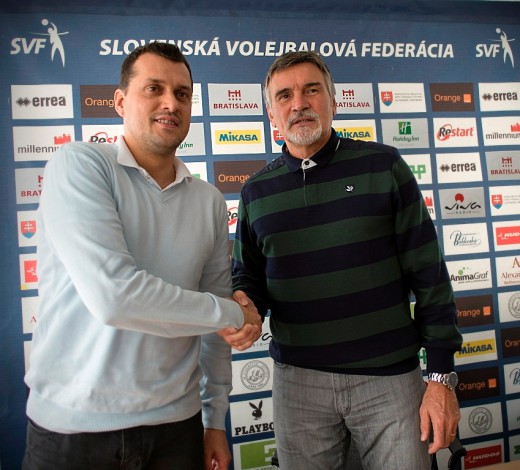 The Slovak national team was coached for 12 years by Miroslav Čada whose contract came to a close this summer and was not prolonged.

“We want to thank Mr. Cada for the great job he did through the last 12 years” says the President of the Slovak Volleyball Federation, Mr. Lubor Halanda. “Under his guidance our national team made it three times to the final round of the European Championship and this is a remarkable achievement. Since we did not achieve this goal for the past couple of editions, we decided to go for a change. Marek Rojko is a young and very motivated coach who spent many years with one of our best Volleyball clubs, Doprastav, and is currently active in Germany. We believe that this was a good decision and we are going to achieve good results in the near future” Halanda continued.

Rojko was the mentor of the Slovak junior national team from 2009 through 2011 and under his guidance the Slovak girls finished sixth at the Junior European Champs held in Serbia in 2010. One year later Slovakia made it to an unprecedented seventh place at the FIVB U20 World Championships in Peru.

“It is a great honour and pleasure to be appointed head coach of the women’s national team” Rojko said. “I know our players very well and hope we can achieve some good results. Our priority is to qualify for the final round of the next European Championship in 2015 and we will do our best also in January as we join the third and last stage of the World Championship qualification. This will be my debut at the helm of the group”. Rojko will be assisted by Monika Smak, one of Slovakia’s greatest players of all time, who already worked with Cada for the last couple of years.