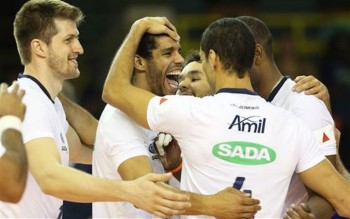 Wallace Souza and Yoandy Leal each recorded 11 points to lead the winners. Eder Carbonera contributed 7 points while Isaac Santos and Paulo Costa each had six tallies,

Mohammed Ben Abdallah finished as the top scorer for the defeated side with 7 points.
Sada Cruzeiro dominated in the blocking charts 8-3 and held a 3-1 margin in the aces category. They scored with 40 spikes to 24 by the losers.

It was a splendid show of volleyball displayed by the local team with almost perfect execution throughout the match against a hapless Sfaxien team that was completely dominated.

“I am very happy with the qualification to the semifinal round,” Sada Cruzeiro’s coach Marcelo Méndez expressed. “The team is improving but we still need to have better services against the stronger teams like the Russian and the Italian” – he conncluded.