Baku, Azerbaijan, March 24, 2012. On Sunday RC CANNES will be going for a possible third crown in the CEV Volleyball Champions League after the players from the French Riviera edged MC-Carnaghi VILLA CORTESE of Italy in the first semifinal played at “Heydar Aliyev” Sports and Concert Complex in Baku (3:1; 25-17, 26-24, 27-29, 25-15). The game was packed with continuous turnarounds and the Italians also had their good share of chances, mostly not exploited, while RC CANNES did miss a couple of opportunities to wrap it up in what would have been three straight – but close – sets. 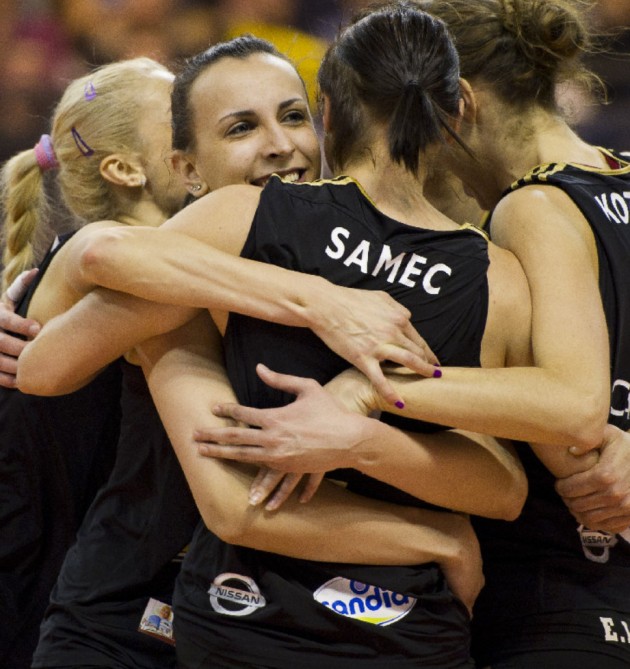 This afternoon RC CANNES and MC-Carnaghi VILLA CORTESE did prolong their rivalry that started already last season and was then extended to the prelims of this year’s CEV Volleyball Champions League where the players from the Riviera had scored two wins, first at home in three sets and then in Italy, this time going for a successful tie-break. The group mentored by Chinese-born Yan Fang was the only side competing in this final four that had already seized the trophy of Europe’s most elitist league – in 2002 and 2003 – and after a stellar campaign in the League Round (RC CANNES was the only team, together with Dinamo KAZAN, finishing there with a perfect and immaculate record) Victoria Ravva & Co. wrote another chapter of their unique history by edging the 2011 champions of Vakifbank TTelekom ISTANBUL in the 1/4 finals, but only via the golden set rule. As for VILLA CORTESE, the club from the outskirts of Milan is in itself a real sensation as that success story started only three years ago and since then VILLA CORTESE has turned into one of the most solid Italian sides to reckon with. Supported by some forty fans that had traveled to Azerbaijan from Italy, the players coached by Marcello Abbondanza were now ready to fight for European glory, having advanced to the final four in what was only their second participation in the Champions League.

The match was refereed by two ladies – Heike Kraft of Germany and Zorica Bjelic of Serbia – as the European Volleyball Confederation has adopted a policy whereby the role of female referees in the most important international competitions is being supported and backed up more and more. Puerto Rican Aurea Cruz contributed the first point of the match for VILLA CORTESE while Italian Nadia Centoni clipped the 1:1 for RC CANNES that quickly opened the gap going up 6:2 with well placed blocks to stop the Italian spikers. Victoria Ravva called for the first technical time-out with her trademark, a fast attack from the middle (8:4), as the Italians looked a little nervous and feeling the pressure resulting from their debut in a final four. Tetyana Kozlova finished a very long rally for RC CANNES and coach Abbondanza stopped briefly the game as his side was trailing 6:11; an ace of Ana Antonijevic stretched the margin before the Canadian opposite of VILLA CORTESE, Sarah Pavan, finally scored the next point. Right before the second mandatory stop Abbondanza changed his diagonal (Pincerato and Caterina Bosetti for Berg and Pavan) but still RC CANNES enjoyed a good margin of 6 (16:10). While sisters Lucia and Caterina Bosetti were standing together on the court for the first time in this final four – Volleyball is a family affair as their father used to coach Italy’s national team back in the ‘90s and their mum was a Volleyball player too – RC CANNES kept rolling (20:13) and even the return of Berg and Pavan could not power up the Italians. VILLA CORTESE scored some points but still Ravva and her friends were dominating the scene – their block being as solid as ever – and an error of Italian middle blocker Martina Guiggi helped the French side seal the final 25-17.

MC-Carnaghi scored the first couple of points in set 2, but RC CANNES clawed back quickly to move up 3:2; after having made the difference in the opening section of the game with a superb efficiency in attack (52% vs. only 36% for VILLA CORTESE), this time the French had to cope with a fierce resistance of their opponents who were eventually leading by the first technical break (8:7). After RC CANNES had got back to the front (10:8), VILLA CORTESE responded with a great serving turn of US American setter Lindsey Berg and the great spikes of Pavan to move up 13:11. The Canadian opposite – who enjoyed a great collegiate career in the US and had spent the last season in Korea – was scoring with great consistency (16:14) while the defense of RC CANNES was getting a little chaotic. Loudly supported by their fans, the Italians set the pace all the way through, with Pavan on a class of her own; however, after Guiggi had contributed two set balls, the story of the set turned completely around, as RC CANNES scored three in a row before an ace of Tina Samec shocked the Italian fans finalizing the comeback of the French ladies (26-24).
The game had turned into an uphill climb for VILLA CORTESE but the Italians showed no fear as they opened strongly there (5:2, 8:4); it looked like Lindsey Berg and her mates were finally playing without any pressure thereby displaying their full potential but their defense gradually faltered and RC CANNES fought back to draw level at 11 anchored by Ravva and libero Paola Cardullo. VILLA CORTESE stormed back again (14:11) forcing a French time-out and enjoyed a margin of 3 by the second mandatory stop. While Tetyana Kozlova emerged as RC CANNES top scorer in this phase, Pavan towered from her 196 cm (21:17) but as the opponent were dangerously cutting the gap, Abbondanza opted for another stop to calm down his girls as the deciding section of the set was approaching. He actually got the reaction he was looking for as three set balls were there at 24:21, but all of these opportunities were dissipated with RC CANNES leveling at 24 all. Centoni spiked into the net, Kozlova compensated with a spike from the wing (25 all) and then stopped Caterina Bosetti to have a first match ball that was promptly diverted by Pavan (26:26). VILLA CORTESE fended off another one before winning a battle at the net that sealed it at 29-27 to prolong that first exciting semifinal.

VILLA CORTESE stretched that enthusiasm and momentum also to the opening of the fourth set (4:1), but CANNES turned the charts around (8:5) on a serving turn of Milena Rasic. Lindsey Berg was conveying quite many balls to young and rising star Caterina Bosetti – 18 years of age – to claw back but still RC CANNES was leading by 3 after an error of Makare Wilson. Great defense and perfect combinations in offense were the recipe prepared by coach Yan Fang to advance to the final act of the Champions League and his girls were executing his plans pretty well (18:12), helped also by some mistakes of VILLA CORTESE. Finally RC CANNES dominated the scene in set 4 and could celebrate its qualification for the final match with a block on Sarah Pavan (25-15). The Canadian opposite was the top scorer of the game with 25 points while Milena Rasic paced RC CANNES with 21.

“I am very proud of my players as they stayed cool and concentrated also after we missed this couple of match balls in the third set. We were able to storm back every time we trailed in the score and in my opinion this was like an extension of our great game against Vakifbank in the 1/4 finals. As for the final, we know that Fenerbahce and Dinamo are two high-class teams, so my only purpose is to be able to deliver our best Volleyball as we did today, that’s all” commented head coach Yan Fang after the game.