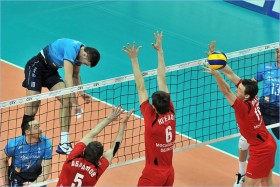 – We need to increase a power of serve in tomorrow’s match, because the “Dinamo” served very well today. If we can align it, then we can align the entire game.

– Unfortunately, serve was not the only problem in today’s match, the reception was a big problem. What is the explanation?

– Yes, the reception was not good, too. Because of this, in fact ,we lost a game today. Once again I will say that Dinamo served well, without missing a court. Our serve was not ‘’flying’’ at all.

– In your opinion, a game break for “Iskra” also played a negative role?

– Of course. There are pluses and minuses in all. We are not in rhythm. In the quarterfinal series with the Krasnodar we won both games by 3-0. To be honest, there was not struggle. I can not remember when we had our last hard match. “Dinamo” is in a good rhythm, they play a CEV Cup. We’ll see what happens.

– This is the end of the championship – the most important games, so the passions and emotions are on the high level. We must be calm, because when the head is hot, and the heart cold – It is wrong. Should be the opposite. When player fully possess the situation, he have control over himself, over his rival. Then it gives the result. So in the end of the third set, I took time-outs to bring players into the normal, the game state. In the end of the match we are missed 5 serves in a row. This is inexcusable negligence.  There are games of survival now, and passions will run high.  We will try to win the series with a maximum result, although it will not be easy.

RUS W: Vinogradova out of court until...