With the announcement that this year’s FIVB Men's Club World Championship will be held at the Mineirinho arena in the Brazilian city of Belo Horizonte, the teams can look forward to a spectacular event. 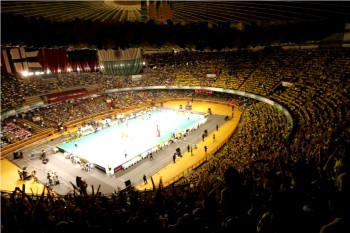 The Estádio Jornalista Felipe Drumond, to give the venue its full name, is the biggest indoor sporting arena in Brazil with a current capacity of 18,000 for volleyball events.

“It’s a great honour to receive this event for the second time in Minas Gerais,” said Tiago Lacerda, Sports and Tourism Secretary of the government of the Brazilian state of Minas Gerais, which joined with the City of Belo Horizonte to bring the Club World Championship to the Mineirinho.

“With the tournament taking place a month before the FIFA World Cup, I think the organization, teams and athletes will feel the benefit. It’s a time of internationalization for Minas Gerais and Belo Horizone and we are expecting 130,000 foreign tourists to come here in a 50-day period.”

The Mineirinho has accommodated even greater crowds in the past. The Sada Cruzeiro club team played a Superliga final in front of nearly 20,000 spectators in Mineirinho three years ago, while there were 26,000 fans for a 1994 Brazil women’s match against China in the FIVB World Cup and a 1995 Brazil-Italy clash in the FIVB World League.