Eight-time World League winners Italy created the biggest upset on the first week, charting consecutive wins against Brazil in Pool A in Jaraguá Do Sul. The Italians also snapped their four-match losing streak against the South Americans. 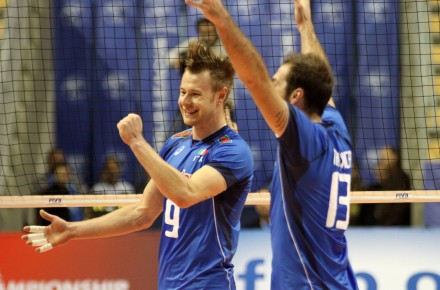 The rise in the level of the Italians’ game can be attributed to their feisty serves that troubled the Brazilian defence, as well as the almost impenetrable blocking scheme that stopped Brazil’s formidable attackers. Matteo Piano’s eight blocks are proof of the sturdy defence the Italian have applied at the net. Piano’s block points are more than any Italian had made in a match last year and also the most that any player recorded in a match against Brazil in 2013.

In Pool C, newcomers Belgium showed a promising performance in their two-match victories against World League returnees Australia. Belgium became the fourth debutant to achieve victories in their first two matches in the World League – the last team that was able to achieve this was the Cuban team in 1991.

All four teams in Pool D saw action during the first week of the World League. France overwhelmed Argentina twice on their own turf, setting a winning streak of five matches in the World League since 2004-2005. While France’s game is on the upswing, Argentina is suffering from a 13-match losing streak.

Meanwhile, Germany managed to tame the aggressive Japanese squad in both matches in Bamberg. In their first encounter, the Germans took full control and closed the match in straight sets. The Germans had a difficult time in the second match as the Japanese forced a tiebreaker. However, Germany prevailed in the final set. Japan’s first set win in their 3-2 defeat against Germany, allowed them to record their 300th set win in the World League.

RUS M: Dinamo Moscow working out at the beach! (PHOTO)

INTERVIEW: Todor Skrimov for WoV – “In...