WL: Jovović and Kovačević – “We dropped a point”

Serbia has opened its World League campaign with a huge win. Squad of Igor Kolaković has beaten Russia 3-2. 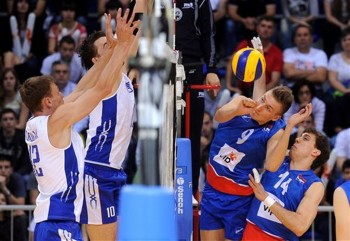 We have to mention that away squad has arrived in Niš without some major players, but nevertheless victory against reigning Olympic, European and World League champion is always a great success.

“Somehow it is the best thing to beat Russia, and we managed to do that. It was a golden victory for us, although it could have been more convincing. Changes in their team disrupted us a bit, but tie-break showed that we are in better shape than them at this moment” said Nikola Jovović after the first match.

His teammate Uroš Kovačević jumped into the starting six instead of injured Nikić and had a tremendous game.

“Sweet victory, but I think that we dropped a point. We thought that we would easily finish the game after 2-0 and that thing backfired on us. Russia is always a quality team, even without main volleyball stars. But, we made a comeback when it mattered the most” stated Kovačević.

WL: Biriukov – “We will fight until the last breath”