Even before the first whistle, serve, reception, pass, spike or block, the 2014 FIVB Men’s World Championship made a triumphal entrance in the record books. 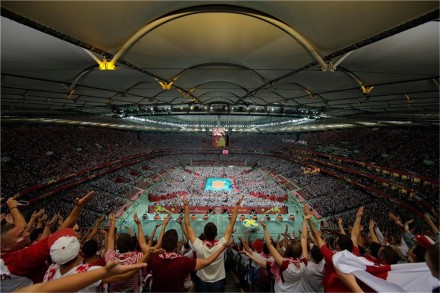 A record-breaking crowd of 61,500 attended the opening ceremony and inaugural match of the eighteenth edition of the Men’s World Championship between hosts Poland and Serbia establishing a new record of spectators for an FIVB volleyball match.
The new attendance mark, which marks the progress of volleyball towards becoming a global sport followed by legions around the world, broke the old record of 50,000 spectators who watched 62 years ago a match between the Soviet Union and Czechoslovakia in Moscow in 1952.
The fans started to pour in since very early on Saturday and completely packed the retractable roof stadium in the capital of Poland which opened in 2012 with a seating capacity of 58,145 spectators for football matches.
The idea of playing the first match in such majestic facility forms part of the initiatives generated by FIVB President Dr. Ary S. Graça F° based on his vision related to innovation and technology.
The state-of-the art Warsaw National Stadium, which resembles a giant bird nest, has won recognition as one of the most functional and appealing sport facility in today’s world.
It is the first time in history the inaugural match of the FIVB World Championship is played in a football stadium and the idea goes back to the early 80’s when Brazil played the Soviet Union before a crowd of around 95,000 fans at Maracana Stadium in Rio de Janeiro.
The Polish Federation considered to play one of the matches of this year’s FIVB World League at the National Stadium but finally decided to reserve the historic occasion for the opening of the Men’s World Championship.