The European Volleyball Confederation has determined the pool composition for the decisive second round of the continent’s qualifications for the 2015 FIVB U20 Women and U21 Men Volleyball World Championships, with eight teams per gender competing in May for Europe’s two spots at each of these major biennial junior fora, scheduled to take place in Cyprus in July and in Mexico in September, respectively. 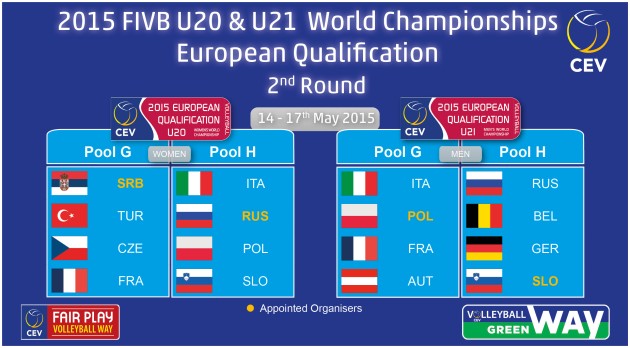 A total of 41 squads took part in the first round of qualifications in January to determine the six women’s and six men’s national teams to join the finalists of the 2014 CEV Volleyball European Championships in the respective gender/age categories among the participants in the crucial battles coming up on May 14 through 17 at various venues in Europe.

For each of the two competitions, the eight teams have been split into two pools of four with the eventual winner of each pool earning a ticket to the World Championship.

The pool composition and host countries were determined as follows: