A very special Volleyball souvenir, the 2012 calendar whose title reads “The golden era of Serbian Volleyball” was officially presented today as the traditional New Year’s cocktail was organized by the Volleyball Federation of Serbia at Hotel “M” in Serbia’s capital city. 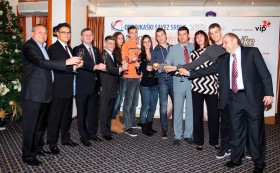 The cocktail was joined by Volleyball players from all age groups, representatives of the sponsors, partners and media who were received by CEV Senior Vice President and VFS President, Mr. Aleksandar Boricic, accompanied by some more VIPs, including VFS Secretary General Slobodan Milosevic, VFS Vice President and Olympic champion Vladimir Grbic, the Team Manager of the women’s national team, Jelena Reljin, and 2011 European champion Mihajlo Mitic.

“This was a memorable year” said Mr. Boricic.

“We had very ambitious goals and plans right from the start and we can proudly say we have fulfilled most of our dreams. As we played host to the 2011 European Championship – Women we embarked on a promotional campaign of the sport that lasted for 6 months and turned into a unique success. No other Championship has ever had such an incredible media and marketing exposure. Both our senior national teams were crowned European champions and this is something special in the history of the sport. We have showed that we have a very strong development program in all age groups. With our “Street Volley” project we have involved thousands of children in the sport and so many more will follow in the footsteps of our current European, World and Olympic champions” proudly stressed Mr. Boricic.

FIVB – “Referees will not decide winners...

Top 10 scorers of the women’s European...