Zurich, Switzerland, December 30, 2011. After spending the last couple of years in Zurich with Volero, 20-year old outside hitter Brankica Mihajlovic will be moving soon to South Korea to join Hyundai Hillstate Volleyball club. 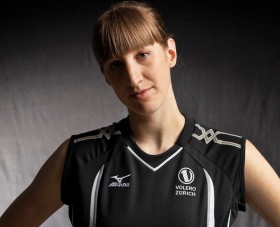 The Korean team got in touch with Volero to negotiate the move of the player born in Bosnia and Herzegovina right after completion of the fourth preliminary round in the 2012 CEV Volleyball Champions League – Women.

“This is a unique chance for Brankica to develop as a player and take the responsibility for being the only foreigner included in the team” says Volero President Stav Jacobi.

“Even though we are just halfway through our campaign in the Champions League and the national championship we had to separate the interests of the club from those of the player” he adds.

“We immediately made it clear that we were certainly not going to stop Brankica and having a good roster we will be able to compensate her departure” he stresses, bearing in mind that Mihajlovic is included in the top ten best scorers of League Round in Europe’s most elitist competition. Mihajlovic will be debuting in the Korean league this coming January 7.

“This move is a real honor also for the Swiss Volleyball family and not simply for Volero as a strong Asian club has been hunting a player that developed herself in our domestic competitions for the past couple of years” says Jacobi.

“This confirms the strong impression delivered by Brankica in the past three seasons of the European Cups as well as at the Women’s Top Volley International in Basel”.

Even though she is about to move to Korea, Mihajlovic still has a contract with Volero that remains in force until 2014.

“Once this season comes to an end, we will discuss with the player and decide about her next plans for the future” concludes Jacobi.